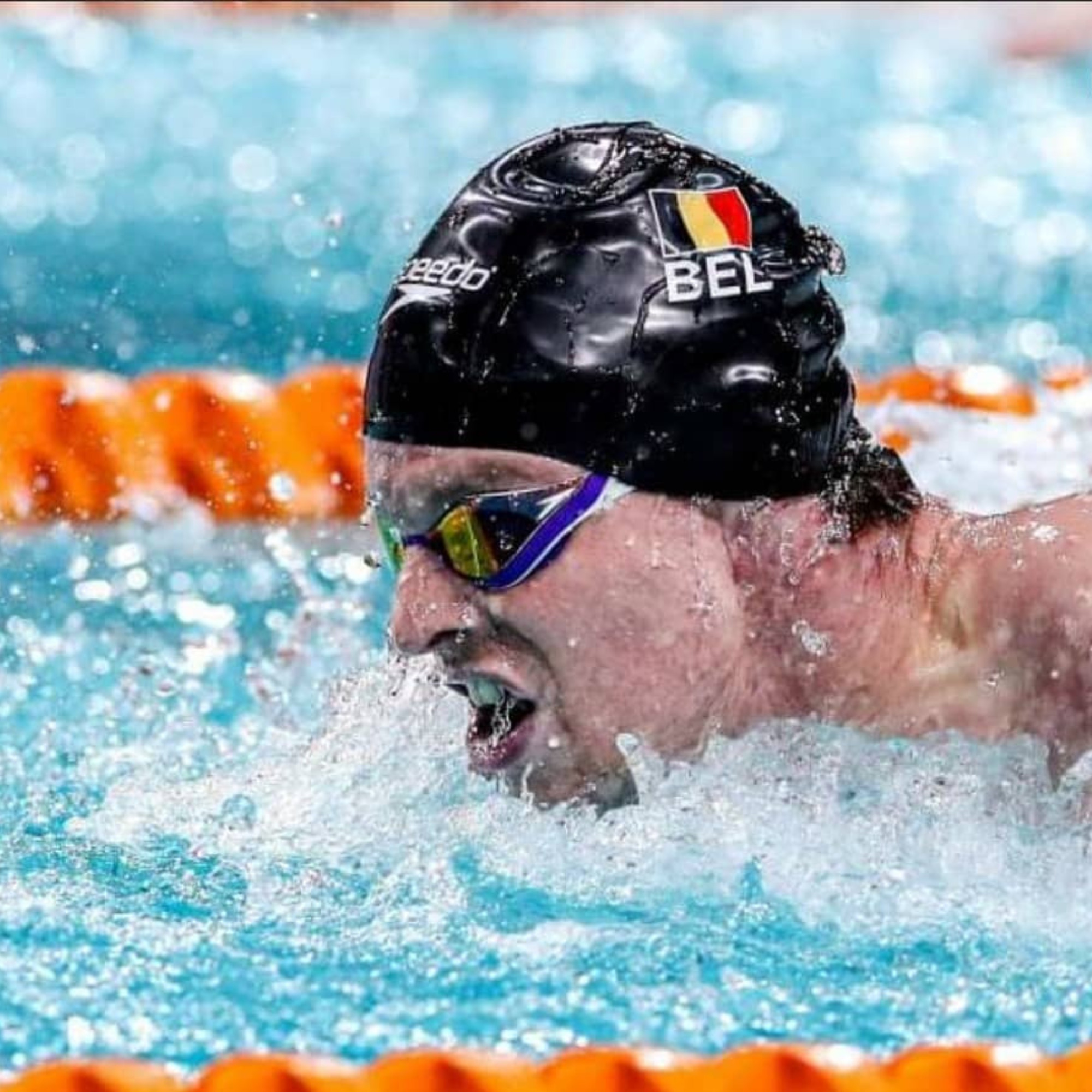 ANNOUNCEMENT  from Louis Croenen
-
After 16 years in which swimming was the absolute focus of my life, I have decided to leave the top-class sporting life behind me.
-
I have a lot of wonderful memories of swimming: the feeling of working hard together, peaking at major championships and achieving goals is indescribable and I will certainly miss that in the future. These remain experiences for life. Nevertheless, it feels like the right moment to start a new chapter in my life.
-
I am extremely grateful for all the nice, enthusiastic and driven people who crossed my path and the unique experiences that swimming gave me. I would therefore like to thank the people who have made a major contribution to my top sporting career, and there are many!
-
I would like to start with the unconditional support of my parents and friend @RenkeSevenants. From travelling to training and competitions at home and abroad to giving good advice, cooking and providing the ideal resting environment. These are just a few examples, but you all did it with enormous pleasure and dedication. It is impossible to describe how grateful I am to you for giving me every opportunity.
P.S. From now on, I can also effectively go and visit friends and family.

An overview of my course.
I remember how happy I was as a young competition swimmer at Shark Herentals. Thank you, Anne Brydenbach-Feyten and Dirk Van Looy, for giving me the pleasure of swimming and for forming such a close competition group. More than fifteen years later, we still often talk about the good times in lanes 1 and 2. Did anyone ever win a bucket of beer by jumping over the flaggeskes, Dirk?
-
I never succeeded, but I learned to persevere. That perseverance was further sharpened in the top sports school, where not all achievements came naturally anymore. I learned to deal with pressure and expectations and to train really hard. A big thank you to all my trainers and supervisors of the top sports school for your dedication, support, flexibility and for preparing me for the real work @LodeGrossen, @StefanDeckx, @IngeLeeten, @KimVanMalderen, @VincentVanbelle, @KevinKuppens, @rafVanDyck, @NathanKahan @PascaleVerbauwen, @StefaanObreno. I would also like to thank @FransVandenWyngaert (then director of TSS) for granting me various flexibilities: a.o. catching up on lessons and exams because of participating in foreign internships and competitions with higher years.

During the first year of higher education, I continued training under the wings of Inge Leeten and Stefan Deckx, a real power couple! It was certainly one of the most challenging seasons, but I was able to combine pleasure with hard training and suffering. I can still remember the gestures and facial expressions of Inge and the laughter of Stefan when we had a go at something. It is impossible to express in words how grateful I am to you. Together with you I took my first steps as a senior swimmer and swam my first BR.
-
Then I moved to the East-Flanders TCW team to train under @RikValcke and @WauterDerycke. In terms of atmosphere, that could count! Extra atmosphere creators and both physical and mental caretakers were both kiné's @VincentCallewaert and @AlexanderVanbekbergen. We had a lot of laughs with you, he-he-he! I will never forget the group atmosphere I experienced there! I look back with satisfaction and pride on the training and competition in the United States and the subsequent World Cup in Kazan, with a place in the finals and a Belgian record as the icing on the cake. It was a long journey, but a big thank you to the whole team for their hard work!

In the end, I chose to continue my career under the leadership of @RonaldGaastra, where @WardPellegrims, @Jidbosch, @StijnAuwers, @StijnCorten, @EllenJacobs, @Wendy_vdzanden, @BiekeVandenabeele, @JeroenMeganck, @IngeDeRidder and @SamMoustie were also part of the team. What a great and professional team! I made a lot of progress in various swimming disciplines, swam a BR on the 100m and discovered a different training approach. According to @Ronaldgaastra I became a real man. To the whole team: hats off!
-
Last-but-not-least I swam last year with Proswimteam (cooperation VZF) under the leadership of @MaartenDeWilde and @NilsVanAudekerke. Half a year ago I broke my own Belgian record. Respect for both of you! Combining the task of coach with a full-time job shows a lot of commitment and passion. A big thank you to both of you!

Of course, no farewell without thanking my training mates. There are too many to mention, but know that one by one you have contributed to my swimming career!
-
Special shout-out to those with whom I have done the most training sessions and km's (and there are many) @JasperAerents (TheChampiooons), @EmmanuelVanluchene (crèmeke? ), @Lander Hendrickx (always accelerate the last 20m), @NilsVanAudekerke (accelerate the first 50m), @KenCortens (ketchupman), @ThomasThijs (ThommieT), @BastenCaerts (BuffelBasten), @AlexandreMarcourt (vliegtuigsj), @SebaDeMeulemeester (if you know...), @lorenzweiremans (Googleman),...
-
Furthermore, I would like to thank the organisations that have supported me for years. Thanks to @Topsportenstudie (VUB) I was able to combine top sport and study. @SportVlaanderen and the @VlaamseZwemfed gave me a lot of opportunities. Many thanks to all the people who have trusted me for years! My sponsors @Speedobelgium and @arenabenelux were always there for me with the latest materials. I have worn out a lot of swimming trunks, my goodness!

Also, many thanks to the volunteers and officials who spend their free time next to the pool during competitions. You are often forgotten, but my appreciation is enormous! Without you, there is no competition swimming.
-
Finally, to all the supporters and family, you were a great support, also and especially during difficult moments. The luck wishes and messages gave me a boost every time!

We will see each other again (at the BC)!
Louis

Surprised at first, but quickly understanding, we have learned of Louis Croenen's decision to end his international swimming career as of today.

From a relatively young age, Louis was an athlete and fairly quickly an elite athlete who clearly defined his individual goals and then systematically worked towards them. At a young age, he chose the topsportschool in Antwerp and quickly found out which direction his competition should go in order to be successful. He then followed a coaching and competition route that had to give him maximum chances of success.

That route was not the easiest. In the first years of his development, he opted for a broad development through alternating strokes, although he and his staff knew that this was not his strongest competition discipline... Through the years, he worked steadily towards those distances and disciplines where he could and would be very successful, namely the 200 butterfly and the 200 freestyle, the latter in function of the relay 4*200vs.

Louis realised his best performance of the season mostly during the main tournament
Louis still holds 29 Belgian junior records
Louis holds the Belgian record on the 100 and 200 butterfly stroke and has an additional 3 Belgian records to his name through relay
Louis has always combined his sporting career with university studies: he is a Master of Science in Movement and Sports Sciences.
Only Belgian swimmer ever to have had 2 finals in 1 day at the OS
Always selected for international tournaments since 2009
5 selections World Championships long course, 5 selections European Championships long course and finals every time
3 participations at the Olympics (London 2012 - Rio 2016 - Tokyo 2021)

BELSWIM thanks Louis sincerely for all those wonderful years of sport and wishes him all the best for the future. Of course we hope to see Louis back in our swimworld often, .... in whatever function!